Thank you for hopping on to learn more on our rare 1/1 NFT – hopefully your next crypto art collectible.

We’d like to showcase our unique viral video (3.3M+ Views) of Siri blowing up a 3D animated concept phone.

Highlighted here are the strengths of the video and why buying this moment in time could be the right fit for you.

We’d be delighted to partner with you and help extract longer-term value from our first NFT drop.

“We’re living an extraordinary period for creativity. IPs born as part of NFT culture are here to stay in history and shape the next 100 years of our society. Once you understand this, you realize the true potential for NFT collections.”

“The Metaverse revolution is underway. We are on the precipice of change with the dawn of a new virtual economy. We’ll inhabit amazing, persistant and shared 3D worlds – ones where NFTs are ubiquitous in the future. In this new paradigm, owning unique verifiable digital assets drives up both flex quotients and also net-worth. Therefore, rarer the NFT the more premium the asset!”

We see collecting Viral Video NFTs as an interesting sub-culture with a niche yet strong community behind it. Everyone has their own definition of virality – from our vantage point having delivered 230M+ viral views on YouTube, it could be defined as videos that have gained significant traction (over 3M+ views) on YouTube or TikTok or any other platform. As NFTs herald a new era of digital ownership where ‘buying is the new liking’, we firmly believe viral video collection is a valuable new asset class (here’s an abstract primer on valuing NFTs, particularly virals). The beauty is that we are still in the early inning of this new digital ownership economy and taking the long view of buy + hold would create maximum value.

Here are a few reasons why we perceive viral video collectibles as high value NFT assets:

The viral videos/meme NFT gold rush has begun. Happy to announce: Our YouTube viral – ‘Siri Hidden Feature’ 3D concept is now mintable as an NFT – on OpenSea under the banner Aatma Collectibles. We are tokenizing this piece of internet history. It’s part of an illustrious group of early(ish) viral videos. You get true ownership of this rare internet antiquity. We believe if the piece is from an earlier part of Internet history, the better its value – as it stood the test of time. We’ve captured cultural value, you get to significantly own the economic upside over the long-term. Go ahead, be a tastemaker now!

COLLECT THIS RARE MOMENT IN TIME

A Slice of Culture – Loved by the Internet

The Video Will ‘Crack’ You Up:

Watch it above! Siri can be unforgiving. Post 3 tries, Siri perceives the phone to be stolen. And blows it up on purpose. If you can’t have your phone, no one else can. Decimation guaranteed.

This CONCEPT video was created prior to Face ID when previous generation of iPhones needed your passcode to enter. We positioned this as ‘Hidden Feature’ on our concept video. Watch here on YouTube too!

One out of five videos that went viral on our YouTube channel. 3.3 Million Views till date. The channel which focuses on fun, futuristic tech concepts (TechTainment by Aatma Studio) has over 230 Million views. This one is possibly our funniest video from our stable!

This video is part of a channel that’s been featured by Tier-1 press outlets such as Mashable, WSJ, CNN and more. WSJ/AllthingsD were kind enough to feature this video on their website. It was called a ‘very clever video’ and ‘innovative in a twisted way’. The trickle down effect led to coverage on other blogs and social platforms. The earned media thus helped propel the video to virality.

This just made my day.. I’m laughing so hard. xD | OMG this is so funny. It made me crack up | OH MAN! I wish this was real. That is so awesome!

GRAB THIS SLICE OF CULTURE

Get Closer to the Artistic Journey – BTS

Learn More On How + Why It Got Made 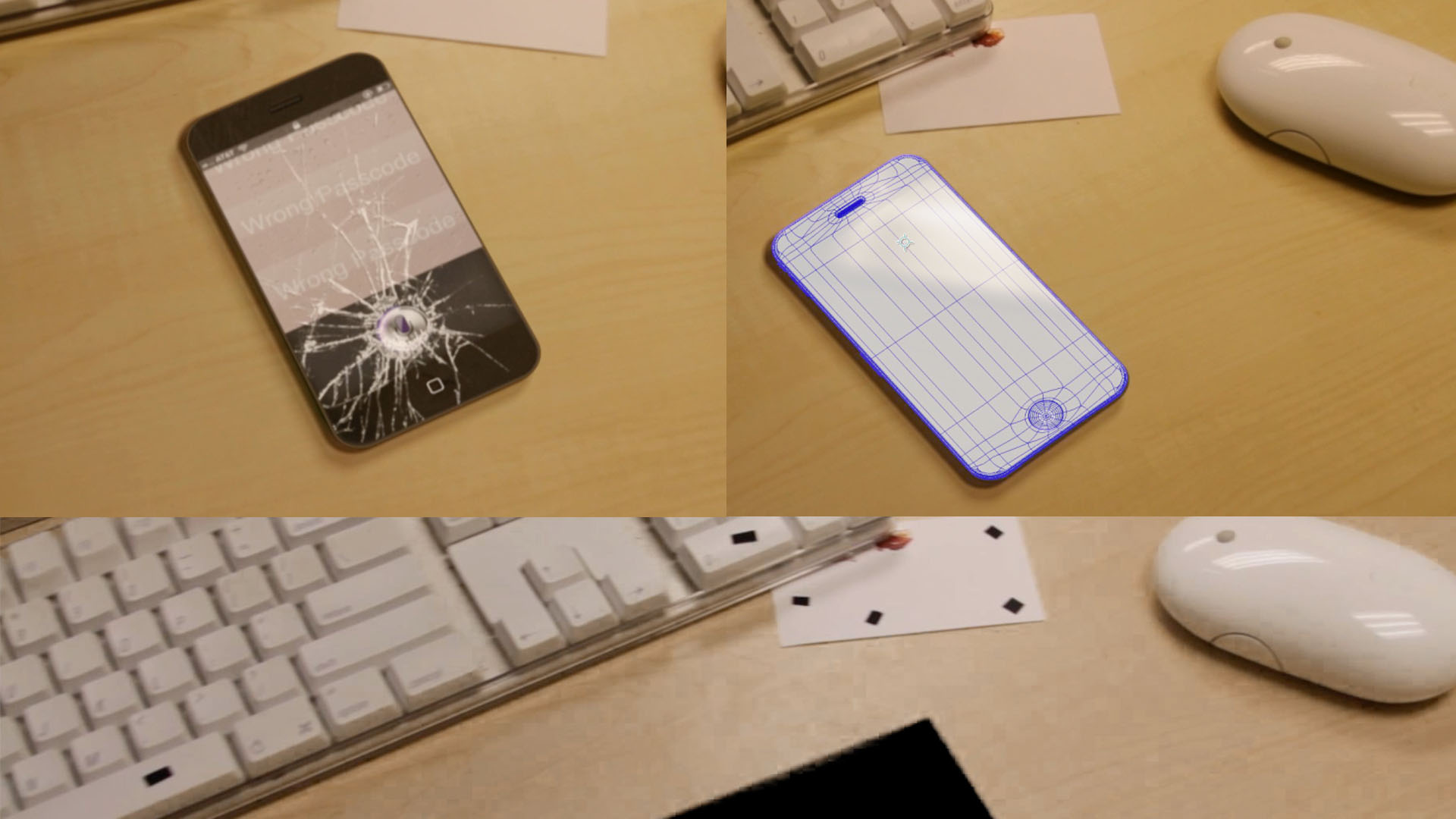 The Creative Process Behind Making the Video

We’d love to take you, the NFT collector closer to the making of this art piece, and the rationale behind it. We delve into the technical details of the VFX and animation wizardry along with the irreverent fun we were aiming to enjoy!

We pioneered the concept video with guerrilla hand held style of shooting & combining it with high fidelity Visual Effects. No one on YouTube was doing concept videos let alone crafting it in a style of VFX used by Hollywood studios. The amount of work it took to pull off something believable and techniques used to achieve it itself is unique for a Youtube concept video. Here’s more on the technical journey, followed by why we did it!
Content Creation
The video was meticulously crafted by our VFX artists that engages some of the same techniques used by big film-making studios. To achieve the suspension of disbelief our artists had to build a 3d model of the concept phone and seamlessly integrate the rendered phone into the live action footage.
This complex process involves 3D tracking the live action footage to extract a 3D camera that can then be used in a digital content creation app like Maya. This mimics the same motion that was captured during the live action shoot.
Live Action
The process starts with carefully planning the live action shoot by placing just enough black squares (tracking markers) so  that the tracking app like PFtrack can latch onto these points during the 3D camera solve. This involved many iterations with trail and error to get the camera solve just right. The shots were filmed on a Canon 7D with a 50mm prime 1.8 lens.
The green card is used as a placeholder for the actor to interact with the imaginary phone. The card will later be digitally replaced with the rendered phone model. The black squares have to be meticulously painted out frame by frame to extract what we call a clean plate. This clean plate along with the 3D camera solve is sent off to the 3D team for them to do their magic.
Modeling
Our 3D artists modeled and textured a highly detailed conceptualized version of the phone. Special attention was given to the design and curved areas of the phone. Even though this was a conceptualized design the goal was to make this feel like it was real.
Deep care was given to the cracked screen element where one of that artists meticulously painted a cracked screen pattern in photoshop that emerges from the Siri logo. This black and white map was later used in lighting to alter the reflections on the cracked areas.
Layout & Animation
Once the model is built its passed on to our Rigging and Animation artists. The rig had just the right amount of controls for the animator to change the pivot points of the phone so that they puppeteer the movement. The animators keyframe animated mimicking the movements of the live action hand. This was a labor intensive process where each frame was keyframed to match up with the movement of the placeholder green card.
When the phone self destructs, special care was given to the animation and the physics of the phone breaking and hitting the desk.
Lighting & Rendering
We captured 360 HDRI imagery during the live action shoot that immensely helped our lighting artists to match the direction and intensity of the lights to our 3D rendered phone model.
The shading on the phone was quite complex to achieve a realistic look with most of the phone being glass which reflects the scene around it. A great amount of attention was given to the reflections to simulate what it may have looked like if we had a real phone on set during the live action shoot.
Composting
This is where it all comes together. The live action and rendered elements are merged together seamlessly to integrate the different elements to a final video.
From lighting/rendering the artists export something called AOVs – Arbitrary Output Variables. These are essentially different passes, like Diffuse, Reflections, Ambient Occlusion, Zdepth etc that give the compositor total control to tweak individual passes to really refine the look and feel of the renders.
Special care is given to match the motion blur with the shutter angle of the live action camera.
Editing/Sound design
Our artists used their real phones to capture some of the audio and sound effects to make the shot even more believable.
No phones were harmed in the making of this video, albiet a few scratches and dings 🙂
Softwares & Plugins used to make the video
Photoshop, Maya, PFtrack, After Effects, Premiere, Audacity, ReelSmart Motion blur.

Apple iPhone launches have almost been cultural tent-pole events throughout its short history of nearly 1.5 decades. Our channel usually timed a concept phone video to a launch, in order to generate buzz and eventually virality. Learn more on our other virals on our YouTube channel here.

When AI based voice assistant Siri was launched, it had its fair share of flaws. Back in 2012, when this video was made Siri would most likely misunderstand what you said, albeit performing some tasks well. This is when we had this funny idea to divest Siri from its misery – to create a video capturing how it commits suicide in order to protect a stolen phone. Thus was born the concept of Siri Hidden Feature. The jest hit the mark with audiences as they appreciated the humor for what it is!

What Will You Get

Proof of Rarity and Digital Authenticity

What More Value Will You Get

We know you’ll have questions. Happy to take them and answer any queries regarding this NFT, how the video went viral or its making of it. We can help brainstorm on creating more value to this NFT long-term. You’ll get a shot at meeting the team of two Aatmans (people who are part of Aatma) for an hour long session each, twice within the first six months.

We promise to surprise you with irl gifts twice in the year one of your ownership, post sale of NFT in your name. You never know what you can get, but its our guarantee that the gift would bring a smile on your face! (Provided the NFT meets our expected reserve price on the marketplace).

The Siri Hidden Feature Viral is our virgin drop part of a collection. Look out for our other blockbuster virals as NFT drops soon!